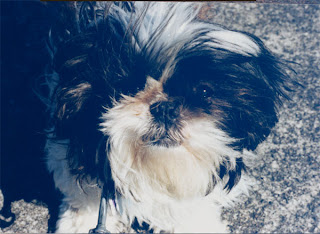 
I keep sitting down to write this, then my heart gets heavy... my fingers heavier, until they are at a standstill over the keys and nothing gets written at all. The weight of these words is great, a eulogy or an elegy needs to be written for my friend of nearly 16 years.

Miss Allie was the queen of our house for many years. A little lady, she came to me as a sickly puppy in February of 1993 when I was a junior in high school. Allie was my constant companion, frequently carried around inside the chest of my varsity letter jacket. Privy to all my secrets, she always showed discretion and never uttered a word to my family, or my foes. She had many adorable habits including carrying her dog kibbles to the softest bed to crunch them, and lying on her back in a lap or someone's arms for hours.

Time passed, and I went away to college. Allie stayed with my father and his wife, and anytime my parents came to see me at school, of course Allie came along as well. She brightened my sometimes difficult days away at school.

In 1996 I decided to move to Seattle full-time, and moved Allie north with me. She met so many people and earned nicknames with my rowdy friends. A witness to plenty of parties, movie nights, long days and sleepovers, she kept my pillow warm if I was up late. She sometimes messed on the floor or chewed up my socks, but these errors were forgiven - after all, had I taken her out a the right time, or had I simply picked up my socks, none of these mistakes would have occurred. The errors were not hers, but mine. I was a young woman and a marginally responsible dog owner.

When Bruce and I met, Allie was living with myself and my cat, Charlie. They were thick as thieves, frequently curled up on the sofa together. Allie would even periodically relieve herself in the cat privy. We frequently joked that Allie figured she and Charlie were the same species.

In November, 1997, along came puppy Paddy. Allie suddenly had big shoes to fill: Dog-Foster-Mother to my bottle baby foster puppies from the animal shelter. During this time, Allie demonstrated she was, in fact, canine. Alternately patient and persistent, she taught the puppies how to play nicely, how to love people, and how to recognize the rectangular highlight of sunlight on the carpet cast through the window as the best place in the house to sleep.

For Paddy, we moved into a house with a yard on Beacon Hill in January, 1998. Although my lease wasn't up until April, it was worth the fee for both dogs to have their own yard to run and play. Shortly after the move, Allie and Paddy, 40lbs but still very much a puppy, were playing. Paddy accidentally injured Allie, resulting in her ultimately losing her left eye. In the process of treating her eye, we discovered that Allie had some serious health problems requiring attention.

Preanesthetic labwork showed Allie had liver disease. An ultrasound diagnosed her with probable multiple intra-hepatic shunts, and microvascular disease. She also had renal calculi on both sides. So Allie started her prescription diet and a schedule of regular blood and urine testing lasting the length of her life. At that time, it was said Allie would not have a normal lifespan and would likely require medications for the rest of her life.

The queen continued to rule the roost with an iron paw. In June, 1998, Bruce and I were married. Of course, Allie and Paddy accompanied us on our honeymoon. She ran on the beach at Ft Stevens, walked along the shores of Cascade Lake on Orcas Island, explored the rocky beaches of La Push. It was the first of many family trips, and she clearly enjoyed it. Allie's favorite place to run was on the beach. 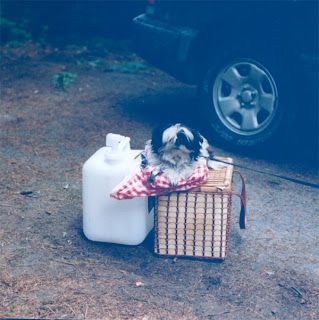 Allie avoiding getting dirty on our honeymoon.


As the years went on, we fostered dozens of dogs. Magick joined the family in 1999, followed by Zora in 2004. Allie always presided over everything without question. None of the dogs ever challenged her, and she always had the best place to sleep, ate in peace and was the first to send up the alarm for visitors or trouble. Of course, she only ever had to bark once or twice - she sent up the alarm, then the "big dogs" followed through to carry on the alert. The Queen was then free to go about her business. 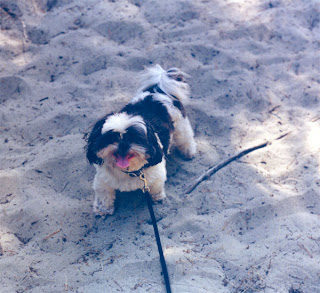 
When Bruce was in the hospital, Allie would sit quietly on my lap during the hour I went home to wash up, change clothes and return calls each day. She licked my face in those private moments when I allowed myself to shed the tears I held back every day. She laid on the bathmat during my showers, and when Bruce was well enough to sit up in a wheelchair for short periods, she visited him in the hospital.

As the years went on, her black fur was salted with gray. She moved slower every winter, stiffening slightly with arthritis and the strains of old age. In 2006, Allie had her first seizure while I was in Florida on a business trip. I feared the worst, and was lucky that Micah was there for me when I got the news. Bruce took care of Allie at home, and Micah took care of my aching heart 3000 miles away.

Shortly after my trip, I started noticing the other dogs were treating Allie differently. They were not as quick to defer, and spent less time interacting with her. She was sleeping much more than usual, and would sometimes seem disoriented or anxious. At night, she would awake and bark for no apparent reason. Another seizure followed, and an episode of severe neck pain with ataxia. I suppose it was around that time I began preparing myself for the reality that Allie wasn't immortal.

During the final 2 years of her life, we all struggled through bad days and rejoiced in good days. She stopped waking up to say hello when I returned home from work or an errand. She would get confused in the yard, continued to have ataxia and developed a hypermetric gait. Over time, it became clear that Allie had a neurologic problem beyond simple senility.

On the day I let Allie go, I knew in the morning when I greeted her that it was time. It rained all morning, and my mood was dark as well. We spent the day together, and we went to the beach one last time. As we were driving to the park, the rain abruptly stopped, and the sun broke through the clouds. A blue sky opened above us as I carried Allie down to the beach in the same varsity letter jacket I used to carry her home the first night of our life together. We walked together along the sand, our footprints side-by-side for the last time. Although she could no longer run, she seemed to genuinely enjoy smelling the scents of the salty shore. We sat together in the sun and I fed her a favorite treat and a mild sedative. She fell asleep in the sun on my lap, there on the rocks looking out over Puget Sound. She slept peacefully through the drive to the vet, and I came home alone with a shattered heart.

Even now my mind plays tricks on my and I see Allie around the house. Though it was very difficult to let her go, I take comfort in the idea she is no longer suffering, and that I was swift to act once she made it clear the time had come.

So this tribute is to the memory of my dear little friend, Allie. The Queen. She was the one enduring force during a formative period of my life, and the lessons I learned from her will stay with me for the rest of my days. I thank you, Allie - for your friendship, loyalty, affection and teachings. I will hold you in my heart and respect your memory always. 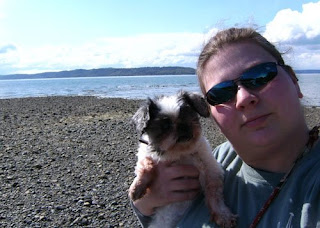 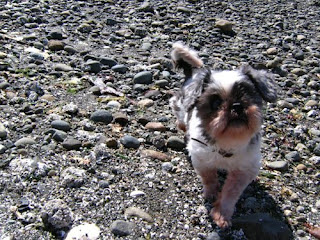 Our last day together... and our last footprints together. 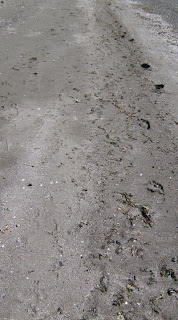