Today we went to Fido's for a change of pace (and sheep). I needed to work on opening up Lucy's inside Come bye flank. Her away remained nice and square on the inside, not sure what that is about but I think it has to do with the draw on our usual field. There is no draw on the come bye side when driving, and a heavy draw on the away side. I think the sheep are drawing her in on that side. Also our shedding was getting a little sloppy, as Lucy was wanting to cheat her down before the shed.

We selected a set of 4 yearlings in an L-shaped field. After setting the sheep, I sent Lucy for an outrun, dogleg fetch and then drove some to see what her flanks were looking like. Her come bye was only square if she was covering the draw.

I had Lucy fetch the sheep back to me, and went back to basics. Walking with her, I did some triangle driving to ensure I could influence her flanks and make sure they were square. At first, even though she knew I was there she still wanted to slice. This surprised me, and demonstrated that this habit is unconscious. I made myself more obvious and continued on, using my crook as a visual aid that I wanted a square flank (quietly flicked/waved it at her eye when giving the flank command).

A square flank resulted in me shhhing her all the way around the sheep to fetch. Sliced flank resulted in a hard lie down. Interestingly, her away inside remained square through this entire process. Pleasantly, her come bye became square after just a few repetitions. I began fading back, letting her drive the sheep away a bit before asking for another come bye on the inside. She took one step into her sheep and just as I was going to open my mouth, corrected herself and flanked nice and square.

Also we needed to practice some proper shedding. Shedding on a farm flock all the time has allowed us to develop some bad habits. I will often call Lucy into a gap on the fly just to get the job done for the sake of time and progress. Also, she is starting to anticipate and get very excited during shedding, looking at me between the sheep when before she required a large gap to look at me through the sheep. This is good and bad! It is good because it shows me she is truly learning the job of shedding and has generalized the task. It is bad because she is now inclined to cheat her stop, taking a couple of steps forward before lying down as we are setting up the shed.

Cheating the stop has big consequences when shedding difficult sheep or light sheep in small numbers. A little cheating doesn't matter if I'm working on 30 sheep, but with 3 hair sheep that have fought us through the whole course, one extra step when she is asked to stop ruins an opportunity for a gap. We started with the same 4 yearlings and split them into 2s. Predictably, Lucy wanted to cheat her stop, as she saw me and a gap and was quick to want to rush in. Fortunately, I was prepared. Stepping at her with intent, I asked firmly for a stop, ignoring the sheep completely. Lucy was very surprised! We then progressed to set up a series of slow, mechanical and predictable sheds. The sheep were easy to split but would run off if given the chance. Every time we maneuvered a gap, I would flank Lucy to hold the remaining sheep across from me, and ask for a stop while putting a touch of pressure on her to guarantee she would not cheat the stop. This was very successful, and resulted in cleaner, more relaxed sheds. I was happy to see her tension diminished and a serious method replacing some of her excitement/anticipation.

After our first work, we ran into Chris who suggested we work on the 30 or so wethers in the big field. I sent Lucy to the right and she scooped the field, requiring one redirect to pick up a sheep behind the water trough on the fence. She then fetched the mob and we began by dividing it roughly in half to set up a draw to shed into smaller numbers. The farm flock training has been helpful here because I can now call Lucy into a flock even when there is no gap and she will move in with confidence, allowing a rough cut.

Once the sheep were divided, we let the sheep go in singles or pairs, until we had shed off a group of 4. We then regathered the mob and repeated this process twice, assuring good solid stops and focusing on the quality of the work rather than just getting the job done. Finally, when we got down to 5 sheep, we then took that packet of 5 and had Lucy drive them away, crossdrive for a bit and then fetch them to me at the pen. The sloughed sheep were about 40 yards away and I opened the pen gate, asking Lucy to pen them. She looked at me with disbelief at first, and kept glancing toward the sloughed sheep that were so close. A couple of quick flanks helped her understand what we were working toward though and she got to work, seriously focused on penning the 5 we had been working. With only one escape attempt (and I was proud, the escapee got more than halfway to the sloughed group and she brought it back without bringing the whole bunch!) we were able to pen them with the sloughed group quite near. This was a really good learning experience for both of us. Lucy needs the confidence to trust me and to begin understanding that sometimes we are working with every sheep in the field, and sometimes we are only working with a small subgroup, and I am here to help her figure out the difference.

All in all, it was an excellent training session with work toward both of the things I wanted to accomplish: opening up her come bye inside flank and correcting the cheated stop while setting up the shed.

Also, the sun was out :) Afterward Lucy had a bath (with shampoo!) and I went home for a shower and 8 hours of cooking.

So question: what is one detail you are working on with your dog right now? How are you approaching it?
Posted by Monique at 12:02 4 comments:

We went to Fido's for the Scott Glen clinic a few weekends ago. The weather was just gorgeous and Diane has a super fancy new lens for her camera, so she took these terrific photos of Lucy. 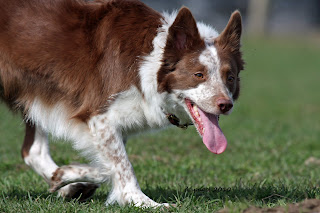 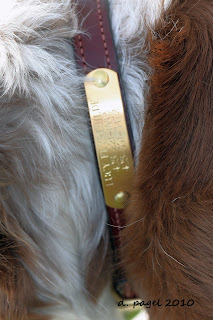 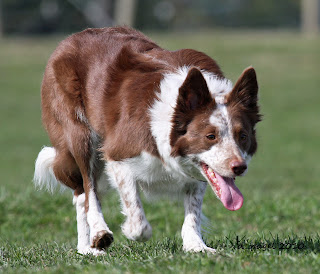 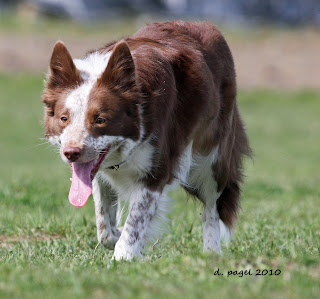 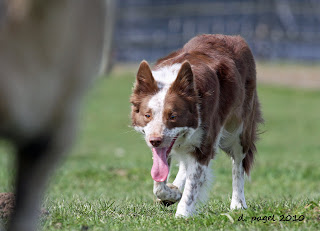 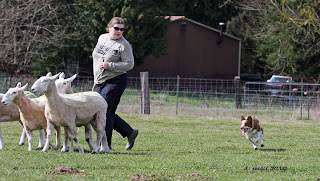 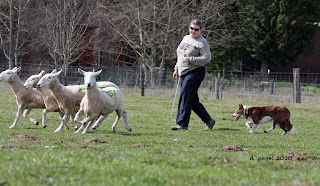 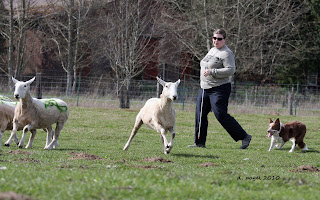