So the original Dogzilla was puppy Paddy. Here is Dogzilla v. 2.0. 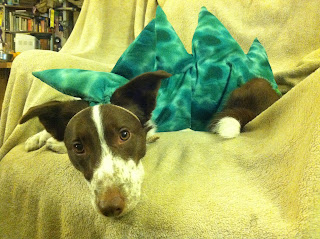 Then there is Princess Magick who is pleased to be the center of attention. 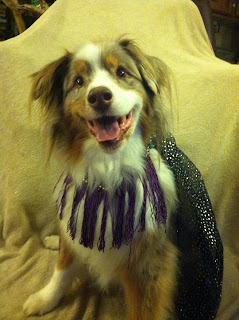 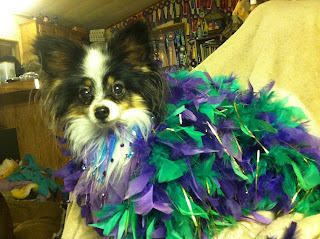 Apparently, Dogzilla's life is exhausting because he fell asleep during his photos! Lucy got a bye on the costume photos since she doesn't really care for having her photo taken :) 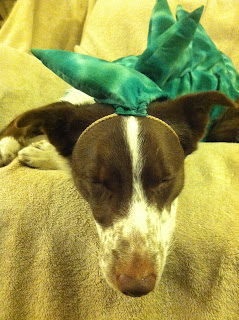 Two years ago, Punkin's Patch started Hug A Sheep Day! Being that I enjoy sheep but am not normally a "sheep hugger," I was skeptical. Alas, this year Jenny convinced me. After all, they even did a story about it on the Today Show's website!

So I set out this morning on my mission to get a photo for hug a sheep day. Rain clothes, a warm hat and my iPhone in its waterproof case in hand, I headed out to the farm. I had in my head that the hug-ee would be Badger, AKA 1203. She was the single lamb of my katahdin ewe who survived a dog attack last November. As a side bonus, she is quite cute.

Phase 1 of the plan: Explain Hug a Sheep Day to the ewe and catch her up. Badger was entirely unconvinced that this is a real holiday and was not impressed with my explanation. A true skeptic, she required convincing, so I called in some reinforcements.

Once the reinforcements arrived, I was able to move to phase 2 of the plan: capture Badger.


Phase 3 of the plan: Somehow get a photo of me and Badger in the same frame without a timer-set shutter or tripod. I decided to give Badger a nice hug around the neck and then stretch my other arm out as looooooong as I could. Looks like my arm was just barely long enough!

I am thinking my sheep are pretty glad this holiday comes only once a year. I told Badger she is lucky it was only Hug A Sheep Day and not Halloween, otherwise who knows what might have happened! I think she would look quite dashing in a set of devil horns ;)

Nice dog, shame about the handler. It's an old one, but stands true for me more often than not. But I'm working. I'm getting better, a little at a time. With a better handler, my dog would have had a better score. But without my dog, I'd not have had this opportunity at all so I am grateful we are partners. Thank you, Lucy.

The "let down" after the finals is starting to wear off and real life is starting to settle back in. Much like when I went to the agility nationals, I felt the culmination of a year's work come down to 13 minutes on the field with my partner. After that type of build up, the coast downhill requires a little mental let-down. I don't say let-down in a bad way, but rather in the sense of taking time to unwind and reflect.

I've had a few more hot showers, scrubbed off the layers of DEET, dirt and sunscreen leaving behind my sunglasses-raccoon tan. The laundry is washed, $8 in quarters later the mosquitoes and blood spatter are scrubbed off my van. The camper is not yet washed but will be this weekend. I'm still slathering on chapstick in recovery mode from a week in the sun-bright high desert.

In non-run-related news, I did not even turn on my computer for EIGHT consecutive days. I can't remember the last time that happened and it felt spectacular. I took my camper on its first journey and got everything set up and working all on my own. I shared meals and wine with old friends and made some new friends as well. I saw the huge moon set in the clear pre-dawn light every morning while walking my dogs and saw the sun set over the mountains every night.

I could not be more proud of my friends. A bunch of us were at our first ever Finals, some of us with our first collie even. We shared the nerves, the excitement, the success, the heartbreak. I think my favorite part of the finals other than standing at the post was cheering on my friends, both old and new.

So now the bad news - our run.

Lucy drew up 2nd dog to the post on Friday, the final day of qualifying. I felt great all week up until watching the "Thursday afternoon bloodbath." However, I awoke Friday energized and excited, my nerves felt good instead of frightening.

I sent Lucy left, though most were sending right. She ran out wide and deep. At one point I thought she was going to bend in and raised my whistle to speak to her, but it was a trick of the light with a brown dog on stubble and she was simply bending out as appropriate. She lifted her sheep without a struggle and cooperated with me. It took a bit of work to get the fetch straightened out but we did it and she brought them right to my feet. Then I made a major handling error coming around the post. I didn't read my dog's mental state well enough and accidentally allowed her to unsettle the sheep coming around the post. The first leg of the drive was spent recovering from that error with a skimmed panel followed by a good turn.

Our crossdrive line and pace were decent, with Lucy feeling her sheep while I blew steadies and she held the line. I made yet another critical handling error at the crossdrive panel. Handlers had been missing the crossdrive panel low all week. I doubted my dog and myself and blew a small flank to change the line right before the panel. Unfortunately, the sheep were NOT low when I blew that small flank. I ended up releasing the pressure to the hard draw upfield and so we skimmed high but recovered for a good turn (read: me blowing 13 billion flanks to protect against a pull through or an escaped brockle face ewe. Lucy took every whistle even though they were fast and furious) and third leg.

In the shedding ring I knew there was plenty of time. Glad I wore a watch. I tried to get everything settled down. The sheep and my dog were nice and quiet, but I wasn't able to shuffle the sheep as easily as I thought I would be able to after watching the past few days. After one missed attempt and having to regather into the ring I managed to get my act together and we took a good shed.

Going to the pen time was tight and I had one ewe who wanted to break back and avoid the pen, ending up stuck behind the gate. Some quick clean flanking by Lucy and a bit of dancing around by me and we closed the gate with 10 seconds left by my watch.

So yes, I made a LOT of handling errors - and I own them. That being said, I also made some good decisions and got my dog back in hand, preventing a grip when things got chaotic with that ewe against the gate of the pen. Lucy gave me her heart and her trust. She did as I asked even when I was wrong. She did what was needed to move sheep some may have thought her incapable of moving. She was such a good partner to me and WE CLOSED THE GATE!!!!!

The feeling of closing that gate, hearing my friends cheer us on even though the score would not be a good one was a feeling I want to cherish.

Some of my fears came true. I did let my mentor down, and I did let my dog down a bit. However, I conquered one of my fears as well. While I may have wished I could have done my run over, I didn't dwell on the bad and I was sincerely pleased with my dog. I stayed in a better mental place than I thought I would have and I was proud of myself for that. My summer lessons paid off and I was able to recover from a problem in the shedding ring and put my head back together to finish the course. Lucy was physically fit and showed almost no fatigue after her run, hopping in the tank because she liked it rather than to cool off.

While closing the gate might not be a big accomplishment to some, for me, in that one moment, it felt amazing. Our run was mediocre, but our partnership is really something special.

I want to thank all my friends for their support along this journey. Words of encouragement or harsh truth when needed help me grow. I knew going to the Finals would either be a time to succeed or a time to learn a needed lesson. In our own way, we did both.

I'm hoping to get some photos soon and will share them when I do. In the meantime, here's a photo of Lucy and I with our sponsor, Scott - and Me with the team I sponsored, Scott and June. Yep, we sponsored one another! (Photo by Jenny Glen) 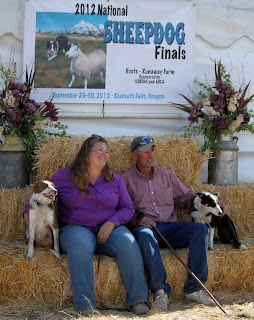