... has a huge heart and proved it today. She laid down an amazing run at the Whidbey Island Classic this morning. I knew it was amazing while it was happening, my heart was pounding the whole time. She gave me everything she had.

I had to leave right after our run to get to work. I just made it with 5 minutes to spare because of ferry traffic.

What I didn't know is that Lucy's run was this good: 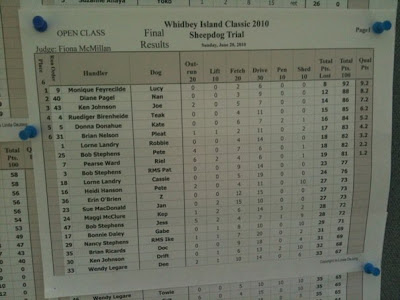 
So congratulations, Lucy, on your first ever Open WIN. Thank you for letting me come on that journey with you.

Thank you to Diane for taking the time to teach me and mentor me, and for selling me such an awesome dog. Thank you to Diane and Scott Glen for training Lucy (and letting me help train her.) Thank you to Scott for support, advice and excellent lessons and to Jenny Glen for her support and advice as well. Thank you also to Derek Fisher and Pat Shannahan for awesome lessons!

Thank you to my true stockdogging friends (you know who you are!) for believing in me and supporting me.

This day belongs to the people who got Lucy and I to the place we are today.

Sincerest thanks and gratitude to you all.
Posted by Monique at 21:38 7 comments: 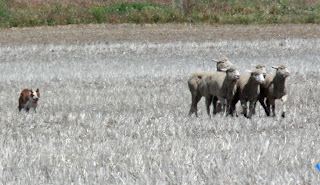 Aside from some handler errors (I am still learning what kind of flanks to use in what situations, and was getting a crash course in range sheep) I was very happy with our run.

Lucy cast out wide and very deep, lifting her sheep cleanly. Full points for her outrun and lift. About 10 yards after the lift, the sheep broke hard toward the set-out trailer. The sheep were tricky because the dog had to be kept way off, but still have plenty of authority. A difficult combination. We cleaned up the break-away to the set-out, skimming the fetch panels.

A tight turn at the post followed by making all of our drive panels (WOW). We had a nice pace going. Many runs the sheep would go through the panels at a good clip and then RACE for the set out. We tried to gear down the sheep a bit before pushing them through the panels. I stopped Lucy on her feet to let the sheep consider the panels and we were able to get tight turns after our panels. The sheep were walking or trotting for the first 2 legs of the drive. I was very happy with the pace and the line.

On the return leg of the drive, the sheep tried to break to the exhaust. REALLY tried. I could have helped Lucy with a wide flank there, and didn't. Live and learn. She got the sheep to me fine, but they were a bit low - to the edge of the shedding ring instead of the center. We lost 10 points on the drive and I figure they were likely all on that return leg.

We got a shed accomplished, last 2 sheep on the head. The sheep were squirelly and Lucy was wound up after the fight on the return leg. We had a near grip (or maybe a full grip, I couldn't see what happened and we didn't get thanked so not sure) keeping the sheep in the ring and were hit hard on points for the shed. I did get her settled quickly, and the sheep also, and then the shed was very straightforward. How different these sheep were than our "home" trial sheep!

After that we made a valiant effort at the pen and had plenty of time. We got 4 sheep into the pen but one was insistent on trying to stand down the dog in the mouth. When I would push a little to try and help, that ewe would try to bolt. If I held off the dog a bit to give her a chance to turn, she would just gain ground on the dog. Tricky situation. We kept backing her in and backing her in but never got the job completed so timed out at the pen. Another 10 seconds or so may have gotten it done.

It was a great learning experience. I am still very excited we went, even for one day. I was bummed to have to come back home for work and miss the second day, I really wanted another try! It was a pleasure meeting so many of the other handlers and getting to know folks better. Everyone was very nice to me after my run and said lovely things about my dog. (Fine dog, shame about the handler...)

11 hours of driving, rain, hail, mud, dirt, dust, sunburn and stepping in a pile of dog poop are a SMALL price to have paid to realize how much more my dog and I are capable of. We are really partnering up and it was a great experience.
Posted by Monique at 21:54 1 comment:

Journeying
learning our way to the destination.
Curled content together
sleep visits beneath
gauzy billows of Milky Way.

Crimson blaze rips
the sky into day.
A silent moment
alone with morning.

I smile at you
and you at me, a knowing gaze.
We touch affectionately
then you leave me,
stealing my breath.

In suspended animation
I freeze.

You always return,
though your route varies,
sparkling eyes igniting
love in my heart.

You bring back my breath,
my heart,
and the most poignant gift:
Awe.
Posted by Monique at 22:32 2 comments:

Notice "anxious" is not on the list. Anxiety is not something I am accustomed to. It's very rare for anything to make me nervous. Well I've been having a minor panic attack about going to my next trial. Lucy has been working well and I have been working well with her. We are teaming up nicely for the season so far. I am really looking forward to this opportunity, and my nerves caught me by surprise.

This will be the biggest trial I have entered so far (yes, I'm small potatoes), and on sheep and a field that are completely foreign to me. Because of my work schedule, I was only able to enter 1 day so I am driving 10 hours for 1 round in Open.

Yes, I'm nuts. I just hope I'm nuts and less terrified by the time I get home!

PS: Thanks to my friends for putting up with my 24-hour panic attack. I've taken your good advice and I am telling myself I feel better.
Posted by Monique at 23:41 7 comments:

Why I am careful what my dogs chew...

It is not uncommon for dog-people I like, respect, love and consider friends to criticize me for failing to feed my dogs bones. While I understand many dogs have no problems with bones, I see this kind of thing at least 3 times a week... Maybe this will help you see why bones may be right for some, but aren't right for me.

Dog #1 came in because of her facial swelling and refusing to eat for 2 days. 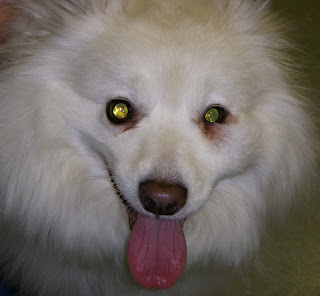 Here is what her tooth looked like: small chip fracture with formerly open pulp chamber. 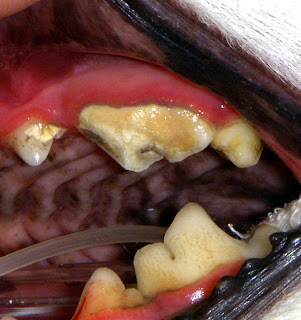 Here is what her xray showed: tooth root abscess caused the facial swelling. 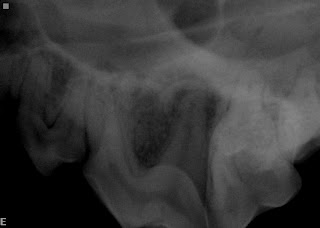 Here is what her tooth looked like once she was anesthetized and we could touch it without her feeling pain: massive open slab fracture. 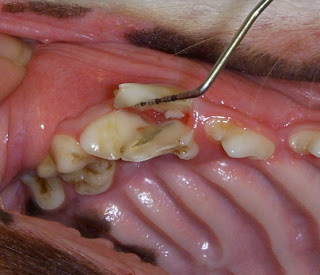 Here is her xray showing the break. 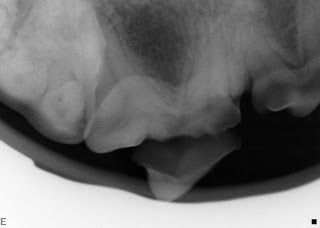 
Maybe all the dogs I see at work just have bad teeth. There is plenty of natural variation there. I just figure I'd be one of the unlucky ones with a dog with bad teeth. So I hide behind my softer chews and a toothbrush.
Posted by Monique at 20:20 5 comments: