The ferry ride home began like any other ferry ride. Sit in line for an hour, hope you get on the sailing you came for. We did, and sailed away from Orcas around 12:30pm. 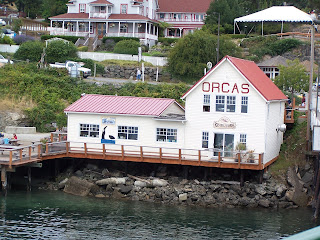 The fun began on Lopez, our stop prior to reaching the mainland at Anacortes. 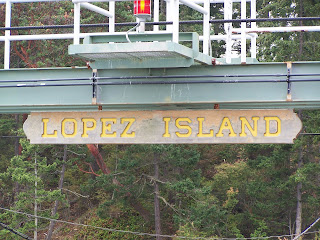 I was riding on the leading end of the boat, hanging out to take photos during the docking. I took some photos that will be a great reminder to me of the skills the WSF staff have for squeezing 2 18-wheelers side-by-side in the center isle of the ferry with only about 2' to spare on the stern of the vessel. At their closest, the trucks were only a few inches apart from eachother as well as a few inches from the walls of the ferry. The parking job took plenty of jockeying around and was met with applause from the onlookers when completed. Truly impressive. The truckers seemed surprised as well.

While we were watching the super-truck-jockeying, some people amused themselves participating in a game I had not seen before: toss a coin into the target painted on the dock. There are thousands of coins on this platform and it is somewhat entertaining watching kids try to hit the target. I tried to keep the wildlife implications of all those coins going into the water out of my mind. 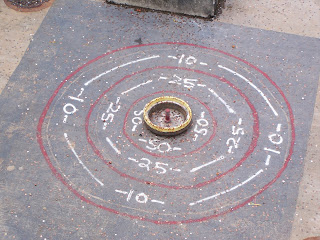 As I watched the kids (and parents) tossing coins, I heard one young teenager (perhaps 14?) making a ruckus about not having any coins to toss. His parents were unsympathetic, as was I, to be honest. However, I would not have imagined his solution. At his age, I definitely would not have come to the same conclusion. What did he decide? 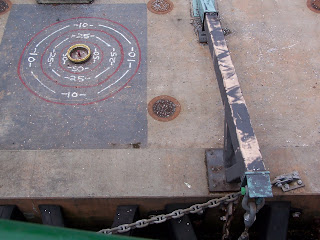 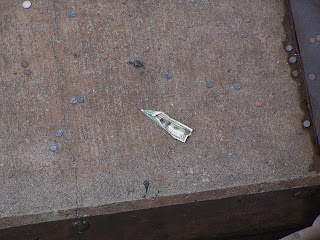 Yes... a dollar bill. In the shape of a paper airplane. What he didn't account for is that airplanes have wings, which experience lift based on wind. Sadly, his efforts were a "wash". 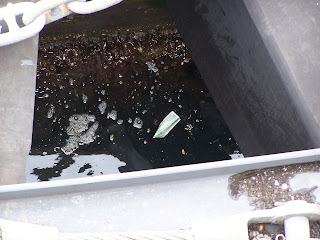 Once the coins and bills were tossed, and the trucks were loaded, it was time to motor back to Anacortes. The voyage was largely unremarkable except for 2 noteworthy discoveries. First, I saw my dream home. Check it out, its even blue! 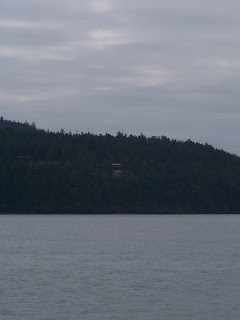 Second, I discovered that the cormorants are nesting in the pilings at the ferry dock. The only place you can really see this is from the ferry car decks. The passenger decks are too high and the nests don't face the docks. Of course, I couldn't help snapping a few shots of adults and their nearly fledged chicks. 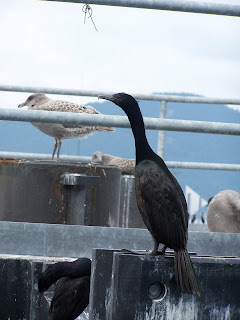 The 2 gray fluffs hiding in the shadows are chicks. 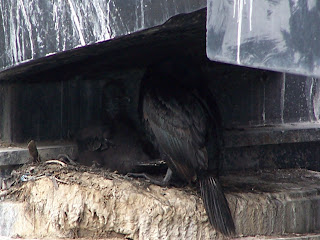 Someday maybe I'll fledge too.
Posted by Monique at 22:29 No comments:

Having 3 weeks off school motivated me to arrange a mini vacation. Bruce and I returned home today from spending 4 and 1/2 days in the San Juan Islands. One of Bruce's friends since childhood, Pliny Keep, is the new manager at Doe Bay Resort. We stayed at the resort in Sea Yurt, a 12' yurt dwelling right on the beach in Otter Cove. Every night the water lapping the sand lulled me to sleep, and shorebirds tracking down breakfast woke me every morning.

The trip began with a race to the ferry after the Shedding Clinic on Sunday arriving near 11pm on Orcas. We fumbled to the resort in the dark, then packed in our gear in the dark and RAIN. Ugh. We spend a couple of days lounging around the resort, enjoying the saunas and soaking pools fed by the natural hot springs.

On Wednesday we took a little inter-island adventure up to Friday Harbor. The ferry passed a pleasure sailing yacht - holy smokes that was a big boat. 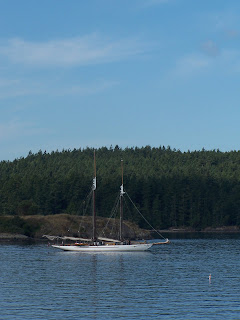 On the way to Friday Harbor, we stopped at Shaw. 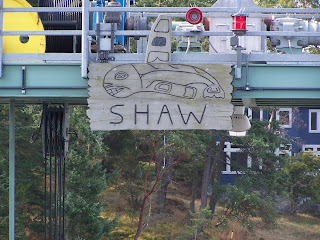 Shaw is the smallest island served by the WA ferries in the SJI. The last time I visited Shaw was in the early 1990's and the ferry dock was operated by a group of Franciscan nuns who also ran the general store. I raced to the forward end of the boat (WA State Ferries are all double-ended vessels, so the bow and stern are interchangeable) with my camera, and was disappointed to see some teenage or early twenties doodlehums running the dock. At least the sign was as I remembered.


Then arrived at Friday Harbor, San Juan Island. My first visit to "the big island". 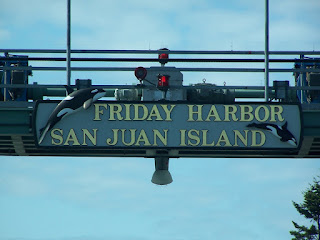 Once on San Juan, we visited English Camp as well as American Camp and 4th of July beach. At the beach, the girls got to swim and I spent a lot of time reading my book in the sun and admiring clouds. 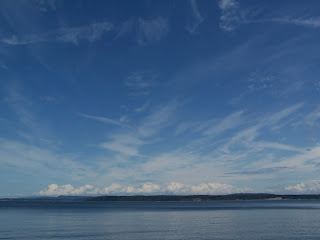 In the 1800s, San Juan was occupied by both the British and the Americans, with a great deal of disagreement about whether the land belonged to the British Empire or was part of the new American West. The treaty designated the boundary to be at the "channel between the islands and the mainland." Well, there are 2 channels - Rosario strait and Haro strait. The British insisted the "channel" of the treaty was Rosario strait, leaving the islands in British hands, while the Americans argued the "channel" was Haro strait, making the islands part of the US. Until the dispute was resolved, the English occupied what is now British Camp National Historical Area on the north end of San Juan, and the Americans held what is now American Camp National Historical Area on the south end.

British camp was a nice stop, with a manicured formal garden featuring these black-eyed susans, 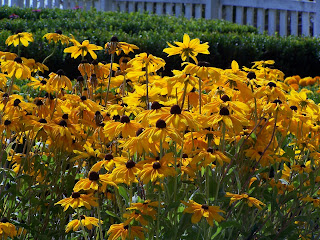 and multiple preserved original buildings. Of course, the colors are flying as well. 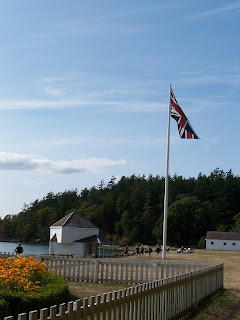 We also visited Roche Harbor and the outdoor masonic temple there which also acts as a mausoleum for the McMillan family. Bruce took a bunch of cool photos but they are all on his camera. You will likely be able to see them on his blog by the end of the weekend.

The ferry ride back was sunny and beautiful, with the light glinting off the water like a million faceted diamonds. 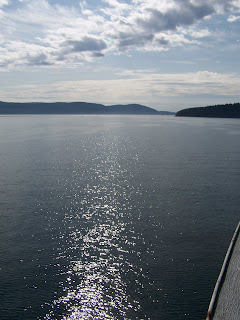 Two days we visited the Eastsound Off Leash Area. It is tiny, but the girls enjoyed the chance to run free and play frisbee, sniff the sniffs and generally have fun. The resort is pet friendly but asks dogs are kept on-lead. While none of the other people who brought dogs seemed to cooperate with this requirement, I was diligent about it, so the girls needed a chance to romp freely.

I was greatly amused both by the yuppie poop-bag station, which included hand sanitizer: 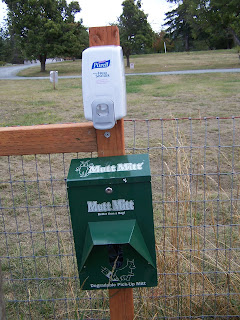 As well as Magick's clear communications. 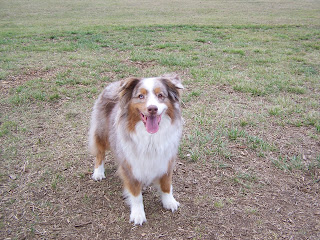 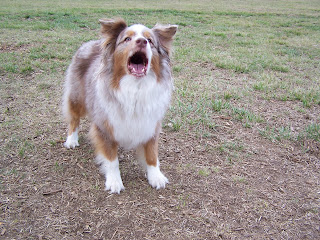 We also went up Mt. Constitution one day, which is part of Moran State Park. It is the highest peak in the SJI and offers vistas of all the islands as well as Canada. The day was cloudy, foggy and cool - as you can see. At least the clouds were photogenic! 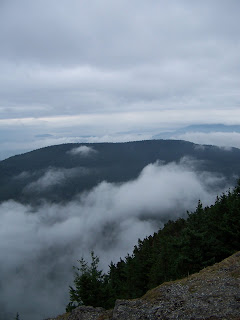 Macia and Sucia islands, in the distance is Vancouver, Canada. 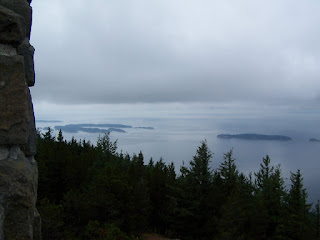 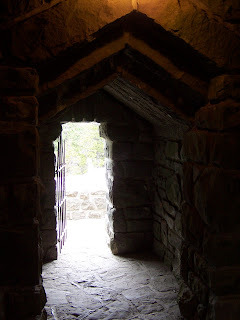 All in all it was a very nice visit. The ferry ride home was its own separate adventure, listed in my next entry.
Posted by Monique at 21:46 No comments:

Last weekend was spent at the Scott Glen shedding clinic at Fido's Farm. I am a complete novice to shedding. I can divide up the large farm flock at Diane's for lesson sheep if needed, but have never been taught how to shed and certainly never tried to get specific sheep. If I needed specific sheep I always gate sorted in or out of a pen.

Thanks to Scott, and to Diane for loaning Lucy to me, the days of gate-sorting-alone are behind me.

The clinic was a mixture of a little classroom/lecture/diagram work to learn the concepts and a lot of time spent in the field. At the beginning of the 3 days I couldn't even get a shed at all. This is always embarrassing when I am working a dog Scott trained and he knows darn well the dog already knows how to shed without my impedance.

The first day of the clinic was basically a disaster. I have the least stock sense of any of the handlers there and am one of very few to get zero in the way of an unassisted shed. After I learned not to be shy and go ahead to create a nice big gap in the sheep, I had much more success. We also learned the technique of calling the dog through and immediately allowing a flank to speed the dog's coming in. This was very helpful with Lucy given that she was slow to come in. She probably just didn't trust my novice, poor-handling self.

Scott showing me the ropes. 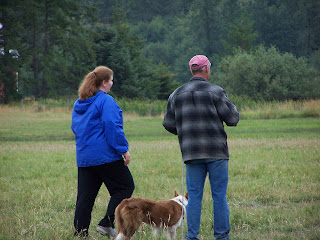 After almost 2 days of coaching, my second work on Saturday showed improvement. We divided the whole lot (20 sheep) by 2's, 3's and 5's all the way down to a single. Diane captured a few photos, here is the best one: 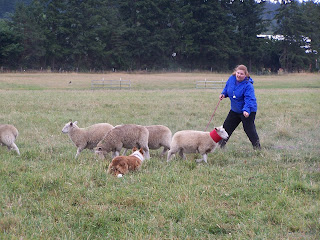 On the third day, Sunday, my brain was fairly well full. We each took an attempt (or several) at an international or marked shed. Though I did not complete my shed unassisted, I did get it down to only 2 unmarked sheep to slough off. I did not expect to complete a marked shed myself, and I did not disappoint. However, I was very happy with how much I learned and with Lucy's willingness to partner with me and tolerate my newness to shedding compared with her level of training.

Lucy went with Scott on Monday back to Canada so she might get a chance to run in the USBCHA National Sheepdog Finals. I hope to go to Klamath Falls, OR for a weekend during the Finals as I have never been there before and it is not often so close to home. It is a way to see the top handlers from all over North America, including the illustrious teacher of the clinic this weekend, Scott Glen (and wife, Jenny Glen!).

I hope Lucy runs well for them, but I will miss her a bunch while she is away!

Happy sheepdogging.
Posted by Monique at 21:26 No comments:

So why hasn't she posted all summer? She was busy with school and work.

But what was the payoff of not playing on the blog?

A 4.0 GPA first semester back at school. Now, don't get used to seeing that - but treasure it now even for a single semester :)

Thanks for all your support my friends! I couldn't do it without you.
Posted by Monique at 21:19 2 comments: