Diane has been kind enough to lend me Lucy to run in Open so I can learn to trial at higher levels of competition. Without Diane’s guidance and generosity I would not be able to participate in shepherding at this level, and I owe her a tremendous debt of gratitude. 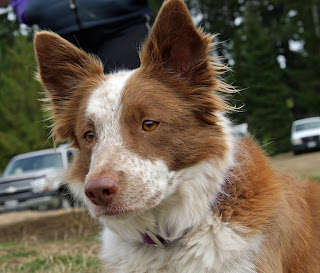 Portrait of Lucy by Diane Pagel, taken at MacDonald's trial

Our first time out was at MacDonald’s a few weeks ago. Lucy listened very well, but I hesitated to fix my fetch line too aggressively and my score reflected it. The drive, and especially the crossdrive, however were lovely. She had one of the nicest crossdrive lines of the day, which I credit to having walked the course carefully and chosen good visual landmarks for my line. We timed out trying to shed, but there were only 3 sheds the entire day so I was not too troubled by it. Overall I was thrilled with Lucy. Her attitude was terrific, she listened very well and had I been more aggressive in my handling on the fetch the score would have been more respectable. However, my goal going into the run was to leave the field with a score, and we did!

Our second time out was this past Sunday at Whidbey. A constant drizzle all day let up just as the Open class started running. The first run of the class, Ron Green and Tait, were the only ones to complete the course and shed. A few issues lining-out the sheep and at the edge of the shedding ring influenced their score, but Ron should be proud of Tait.

We were the 13th team or so to the post. Lucy was quiet and intense as we walked out, spotting her sheep at the set-out while we went to the post. I sent her left and she cast out wide and deep as she made her way up the field. Her fetch was nice and straight after a soft lift that kept the sheep from bolting. Many dogs lost their sheep either partway or all the way to the set-out as the draw was very heavy at the top end of the course. We turned the post a little too tight, with one sheep squeezing between me and the cone. Very nice first leg of the drive and most of the crossdrive. The draw again is very heavy on the crossdrive and for dogs who were too hot on the sheep or not in control the sheep would bolt for the set-out. We were a smidge high at the very end of the crossdrive, skimming the panels rather than making them. They were a bit tough to judge, being grey metal gates against the grey sky in afternoon light/rain. Then a very tight turn at the crossdrive panels and a nice straight leg to the pen. Sadly, my judgment was off and though the line was straight, it was about 5’ high. Next was a nearly perfect pen, no fiddling around, just slow steady quiet work.

The sheep really liked Lucy and were quite relaxed. The pen and first leg of the drive took a little time, so we were not in great shape going to the shed. I had just set on enlarging a gap when time was called, but felt really good about our work in the shedding ring. The sheep were settled and did not jog around the ring or get upset, which was an improvement from last time. Lucy ended up with a 4th place finish. I was ecstatic with her performance. She listened beautifully and was steady and quiet but authoritative behind her sheep. The sheep really liked her style and we did not struggle the way some teams did with sheep constantly bolting in one direction or another. Though light, the sheep were honest and if the dog was right, nice runs were to be had. Perfect evidence was Linda DeJeong’s run with her Michael – quiet, calm and smooth.

All in all, I am very proud of Lucy. Thanks to the support of Diane and other members of the herding community, I have opportunities unlike any other to participate in a sport I am growing to love. Many thanks also to Sue MacDonald and Susan Crocker for being such supportive trial hosts for me as a new handler running Open for the first few times.
Posted by Monique at 17:14 1 comment: