I want to wish sincere congratulations to my dear friend Lora Withnell and her charming little bitch Sally on their first Open WIN!! They laid down a smoker at the District 1 Regionals today. First team to the post and their score held all day!

Lora was so excited for me and just wonderful when I was so happy about Lucy's first win and I really treasured that moment. Here's a little celebration for Lora and Sally in return: YOU GO GIRLS! 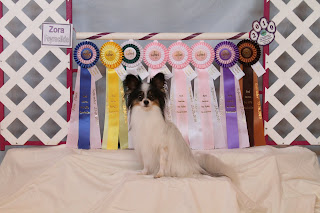 
Well this was my first time competing in a national championship for any sport, and it was a major thrill to do so with Zora. She was a terrific partner. Every mistake was mine. She ran clean in 6 of the 8 regular rounds, with both course faults being mine.

NADAC Championships were at the CamPlex in Gillette, Wyoming this year. The drive was long but easy, and Courtney and Logan came long, so Courtney shared the driving duties. I think that was the farthest she has ever driven in one sitting! The first 800 miles of the drive are actually fairly interesting and beautiful. The last 300 are monotonous and can't end soon enough. Especially the last 70 miles getting to Gillette really had us feeling grouchy.

I was a bit leery going into the event. I had heard plenty of horror stories about how disorganized the event would be, how exhibitors never knew what to expect because the running order was changing all the time, etc. I am pleased to say none of those things were problems at all. The running order was the same every day, and with the exception of day 1, the days ended at a reasonable time (before midnight). The live feed on http://www.agilityvision.com was a great feature. Then if people left to take a break, get a nap at the hotel or the Stakes people needed to know when to show up, they could just log on and get a LIVE update on where we were in the running order. I think that really simplified things for everyone.

Zora ran great. After round 5, I felt very certain we would be out of the finals. I made a critical handling error and was a half-second late realizing it, resulting in 10 course faults. Imagine my surprise on Sunday when they announced our names to run in the final. I was very excited!! Zora's final run was lovely and I am very proud of her. She really peaked at the right time. We had a detailed training plan in the 3 months leading up to Champs, and I think it really paid off. We focused on a different training goal every session, and progressively longer courses until Zora and I were both comfortable doing about 50 obstacle courses.

She was the smallest dog in her scoring group, and ended up coming 4th place overall. She was only 0.76 of a point behind the 3rd place dog (a small margin given that the cumulative scores were in the 700s by that point in competition).

Looking back, it was a very fun experience. Everyone was very supportive, the friendship and cheering were really amazing for every dog. It was exhausting: a mental marathon for me and my dog, especially with going home and doing homework every night. Without the homework it would have been MUCH easier! That being said, I think it was a fun thing to do once, but I don't know if I would go again. It was a ton of work and a ton of fun, but maybe not something to do on a regular basis!

Here are the videos of our runs (even the bad ones).
You can also view the videos bigger on my YouTube channel.

Round 1 was divided into 2 courses with a 45 second break between them. Zora ran both halves clean and earned 1st place.

Round 5 - one fault (I realized too late she had not taken my come-in after the tunnel, so my hand to begin the front cross looked like a support to her resulting in the dogwalk fault)