Because of Diane's incredible generosity, I had the opportunity to run Lucy in open again last weekend. Thank you, Diane!!

Each time we have gone to the post I have had different goals for the run. Our first time out I wanted to leave the field with a score - and we did. Second time out I wanted to have a straight fetch, tight turn at the driveaway panel and a nice pen - another successful run. I worried I had set my goal a little too high this weekend because I wanted to accomplish a shed on the trial field for the first time. Lucy has more shedding experience than I do, but we work nicely together and I was optimistic.

We went to the post and Lucy was very excited. I sent her to the right with a "shhh" and she was off like a bullet. We were running two scotties and a coop. Her outrun and lift were perfect, on the fetch she was a bit in the bubble and the pace was a little fast. I wasn't terribly concerned because I wanted her to feel powerful in the beginning as I knew the sheep had been heavy on the first leg of the drive for everyone, there seemed to be a 2-direction draw right at the driveaway panel and I wanted Lucy to be able to establish a good push on her sheep after the lift. The rest of her fetch was nice and straight, settled her down. A tight turn at the post and a good first leg of the drive. It was a very tricky first leg with several different draws and a few dips in the terrain the sheep were working to avoid. Lucy pushed her sheep through the drive panels and we started the crossdrive. I had some trouble with depth perception and the sheep were high. I realized it and sent Lucy to correct it but she was unwinding her comebye flank a little so it took a bit to get things back online. The last half of the crossdrive was very nice and made the panels handily, then a tight turn and straight return leg to the pen.

The sheep marched into the pen except one ewe turned on me as I was closing the gate. I leaned at her to let her know no sheep would be leaving the pen - and slipped in the mud, falling down. I was laughing and I think the spectators thought I'd broken a leg. Well I hopped back up and slammed the pen shut, then it was off to the shedding ring for a single taken any way. It had been mixed results so far for singles. I let Lucy push the sheep into the ring straight away from the draw, then flanked her around and the sheep lined out nicely. I had planned to hold the coop as she had been lagging off the scotties during our entire run, but a little pressure from me and a sizeable gap opened up with one of the scotties singled. I called Lucy into the new gap on the fly and she did just great. She whipped past my leg and turned on the single with great intensity, and everyone started whooping and clapping. We had done it! Our first shed on the trial field together! I sent her to look back and put the packet back together, then started them to the exhaust. I called Lucy to my feet and gave her a well-deserved pet for a job well done. She was dancing with joy and her eyes were sparkling with excitement.

Diane took a few pictures to document our first ever shed! Unfortunately she did not get the part where I fell down at the pen. Maybe next time. 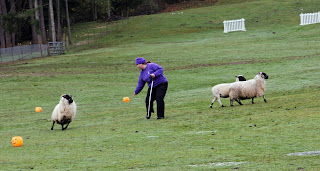 Called her and she's come in about halfway, the single has already started moving off her.

Flanking around me to cover the single who wants to rejoin her friends. 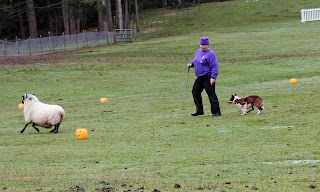 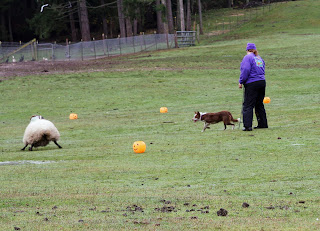 Lucy holding the single and looking quite pleased with herself.

After we were done exhausting and a few more runs had gone, I saw a partial score sheet and was shocked to see Lucy and Bob's Mojo had both earned 84's... the next dog back was 10 points off that. Mojo was sitting in 1st and Lucy in 2nd (Mojo had a cleaner fetch). Then it was time for me to scribe, so I was out of earshot and just concentrating on paying attention to the judge for every run. After the class was over the final scores posted and a fellow competitor came running over to say congratulations... it turned out those 84s stood up to the whole class. Lucy earned 2nd place in open and our first ever finals points together.

Lucy is an inspiration to me. She is so willing, eager and enthusiastic. She does everything I ask with love and gives 110%. While she is not the most powerful dog in the world, and will unwind flanks from time to time, every dog has faults. As a handler I have millions more faults than Lucy and she carried me that day. I am so proud of her and of her success coming 2nd place with a tied score. What a GOOD GIRL.